2, 2 and 2: Sarah Drummond talks about The Sound

It’s a pleasure to welcome Sarah Drummond to looking up/looking down to talk about The Sound.

Sarah is a sublime writer. I was delighted to find that we both had pieces in the anthology Purple Prose (2015), and hers— ‘“Is a magnificent story”: Interviews with pigeon fanciers’—is one of my favourites.

Her first book, published in 2013, is the much lauded Salt Story (2013), a memoir of her time deck handing on the south coast of Western Australia. It was shortlisted for the Emerging WA Writer Award in the 2014 Premier’s Book Awards and longlisted for the prestigious Dobbie Award in the same year.

Her new book, and first novel, The Sound, is based on the true story of the Aboriginal women and sealing crews who sailed from Van Diemen’s Land to Western Australia in the 1820s. Here is the blurb:

Wiremu Heke of Aramoana joins a sealing boat on a voyage from Tasmania to Western Australia. He is on a quest to avenge the destruction of his village but soon finds himself a part of the violent and lawless world that has claimed the lives of those he’s known. It’s a world inhabited by men from many nations. Men who plunder seal colonies and steal women and children from the indigenous communities who live on the islands and shorelines of Australia’s south. 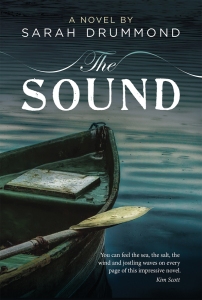 1 Selkie stories have guided a lot of my historical fiction. For those who don’t know the tale, selkies are an old Orkney legend about the female seals who shed their seal skins to turn into women on the full moon. They sing and dance on the shore like sirens. When a man finds their shed skin, the woman has to follow him. Often she will spend years searching for her skin, yearning for her sea people. She may have children with him, she may love her husband, but she still wants to be beyond his control, to return to her people. Every day, she searches for her skin. I saw the Tasmanian women as searching for their skins after the sealers took them to the islands as wives and workers.

2 Working on small boats with Salt directly inspired my first book, Salt Story, of sea dogs and fisherwomen, but it also inspired and informed much of The Sound. (I was writing both books at the same time.) My boss, aka Salt, is descended from a sealer who died when he was accidentally shot through the neck in the 1850s. Fishing the south coast was rich with stories, experiences, landscapes and seascapes. There is nothing quite like being out on the water at night and seeing phosphorescent whale tracks.

1 There are many places connected with The Sound. My favourite is the inlet Waychinicup. It is the setting for a scene in the novel where William Hook, Moennan and Tama Hine set a fishing net at night and they see phosphorescence, fire in the water. This scene is peaceful and sensual, a cultural meeting, and an intermission from the chaos and violence in their lives.

2 I say often that The Sound was written from the sea. A proofreader mentioned to my editor that, although many writers dwell on the Australian landscape, this was the first book she’d read where the landscape is experienced from the sea. I really liked that comment because I tried to write it that way. In the 1820s, European Australians were sea people and the Southern Ocean was their highway to transport goods and people.

1 The paper ‘Of Other Spaces’ by Michel Foucault helped me to explore how the Breaksea Islander community survived and negotiated living as a kind of separate society, lawless and away from the rest of the world. I think his final paragraph is quite magnificent:

Brothels and colonies are two extreme forms of heterotopia, and if we think, after all, that the boat is a floating piece of space, a place without a place, that exists by itself, that is closed in on itself and at the same time is given over to the infinity of the sea and that, from port to port, from tack to tack, from brothel to brothel, it goes as far as the colonies in search of the most precious treasures they conceal in their gardens, you will understand why the boat has not only been for our civilisation, from the sixteenth century until the present, the great instrument of economic development (I have not been speaking of that today), but has also been simultaneously the greatest reserve of the imagination. The ship is the heterotopia par excellence. In civilisations without boats, dreams dry up, espionage takes the place of adventure, and the police take the place of pirates.

2 And this is not a quote but a painting by Louis de Sainson, artist aboard the French exploration ship Astrolabe that was moored in King George Sound while the sealers were there. The day after the Astrolabe left King George Sound, the sealers marooned five Menang men on an island so that they could kidnap those men’s wives and daughters. I realised one day on looking at the image that it gave me a tremendous amount of information, including how a European could include a grass tree on a beach shore to give an ‘authentic’ vision of Australia to the folk back home! It also gives me a sense of immediacy, a sense of occasion.