Map of a murder…

I love the State Records Office of Western Australia—an infinitely fascinating repository for archives relating to Western Australia’s European history. I’ve used it as a research resource for three of my books, and I spent several weeks there recently (with many more to come), working on a new novel in the preliminary stages of research and development.

While I was there, one of the archivists showed me the macabre map you see below. I actually hadn’t seen this during my research for The Sinkings in 2003–04, which I suppose confirms my belief that research is never finished; there’s always something more to find.

The map was produced in 1882 by Licensed Surveyor Fenton W. Hill, for the Albany police officer Sergeant Hector McLarty, who was in charge of investigating the murder of Little Jock King. It shows The Sinkings, the site where Little Jock was murdered on 2 October 1882, marking where various body parts were unearthed about a month later—’BODY FOUND’, ‘LEGS FOUND’, ‘HEAD FOUND’. It also shows where the bucket and axe used by the murderer were discovered (these had also been buried).

The map was referred to in evidence during the trial of John Collins for the murder of Little Jock.

What an incredible artefact of Western Australian history to have been kept and preserved, and what a thrill it was for me to be able to examine it (although that might sound a bit gruesome, given the content!).

My reaction confirms another belief of mine: that old obsessions never die; they just lurk in the background while you get on with other things. 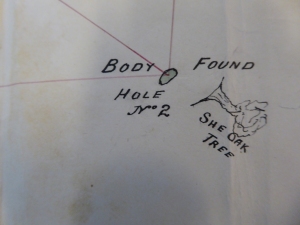 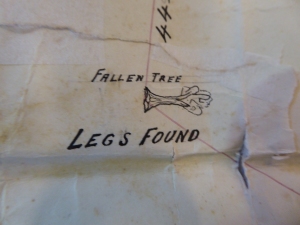 Map courtesy of the State Records Office of Western Australia, and my thanks to Senior Archivist Damien Hassan.

Tagged as State Records Office of Western Australia, The Sinkings

Ten years ago today, Little Jock came into the world—in fictional form, I mean; the real Little Jock was born about 170 years before that and left it, in horrifying circumstances, in 1882. There is no gravestone to mark his singular journey through life as a maybe-man—waif, thief, convict, shepherd, sandalwood carter, murder victim. But there are all kinds of memorials…

My first novel, The Sinkings, which in part imagines Little Jock’s life, was released on 1 July 2008.

UWA Publishing director Terri-ann White has gone on record as saying that having your book published will not change your life. I’ve told her more than once: I disagree. A big thank-you, Terri-ann and UWAP, for changing mine.

Tagged as The Sinkings

Resources for students studying The Sinkings

This post is for students studying The Sinkings as part of the ECU unit ENG3170: Diverse Voices in Literature.

Intersex Society of North America (in 2008 changed direction to become Accord Alliance, but the ISNA website remains as an archive)

The reading list below is by no means exhaustive; obviously, there are many more publications now than were available during my research in 2003–05, and you can access current sources via the sites above. However, the following are the principal sources that informed the development of The Sinkings and may provide useful perspectives on intersex, cultural labelling and gender fluidity.

Colapinto, J., As Nature Made Him: The Boy Who Was Raised as a Girl (Perennial, 2001). The Colapinto article (first published in Rolling Stone in 1997) that preceded this book is available here.

Domurat Dreger, A., Hermaphrodites and the Medical Invention of Sex (Harvard University Press, 2000).

—— Intersex in the Age of Ethics (University Publishing Group, 1999).

Fausto-Sterling, A., Sexing the Body: Gender Politics and the Construction of Sexuality (Basic Books, 2000).

Tagged as intersex, The Sinkings

History, fiction and ‘truth’ in The Sinkings

History, fiction and truth seem to be on the agenda for discussion again in the wake of recent novels such as Hannah Kent’s Burial Rites. Here’s a version of a talk I presented at the Perth Writers’ Festival in 2009, subsequently published on the website of the late (and lamented) journal Indigo.

A discussion about history and notions of ‘truth’ as these relate to a work of fiction seems to demand some explanation from the writer of what is ‘real’ in the novel.

The inspiration for The Sinkings came from reports (recorded in many sources) that the remains of a murdered former convict known at the time of his death, in 1882, as Little Jock were initially identified at autopsy as those of a woman. This ‘fact’ comes from the historical record and is in that sense ‘real’.

Much of the historical narrative in The Sinkings—the events leading up to the murder—is constructed using names, dates, places, events and reportage found in archives. But I can’t claim ‘truth’ for these ‘real’ aspects of The Sinkings.

I’m a novelist interested in history, not a historian. My fascination with history always veers towards the ‘what if?’ questions, an imaginative connection with people and events as a way in to art, rather than an objective pursuit of evidence and facts—although the latter undeniably has its seductions.

Many of the named characters who inhabit the historical narrative did exist, but you can’t divine character from fragments of fact found in archives, and I’ve had to imagine these people into being. I tried, wherever possible, to be attentive to little clues I saw in the records, but being faithful to the record is not the same thing as being faithful to the person. What I’ve written is a product of my imaginative engagement with what I found.

Similarly, I have had to invent scenes and events to fill in the significant gaps in the story of ‘what happens’—things that are simply unknowable of a life seen from a distance of 150 years.

The subjective nature of how I’ve used and interpreted these ‘real’ elements in The Sinkings is, to some extent, transparent. The novel’s structure has a contemporary narrative (Willa’s story) documenting the process of research for a historical narrative (Little Jock’s story), so a reader can witness, from what Willa discovers and what eludes her, where the limits of ‘knowing’ are and where the inventions lie.

The voice of the historical strand, too, announces its own ambivalence, its invention, when it says:

Perhaps it begins with a lone carrion crow flying over a cabin.

It’s a version of ‘once upon a time’, clearly outside the realm of the factual. This ‘perhaps’ voice reappears from time to time, a reminder that although the inspiration for the story might be ‘real’, this is fiction.

History and truth are, in any case, uneasy bedfellows.

When I was researching The Sinkings, I happened to read about a device that landscape artists used to use for sketching, called a camera obscura. It’s a box-like device that captures an accurate outline of the landscape in front of the artist, who then uses this flat image a guide, or a base on which to create.

It occurred to me that in some ways, a writer’s research can be like this. We go to archives in search of facts, records, evidence to use as a base, later to be reworked into story, made three-dimensional. But then I realised that there’s a crucial difference. The evidence of the camera obscura—the flat image of veracity, of truth—is unmediated in the way that archival records are.

I don’t think I really appreciated this before I began my research, but I came to understand that sometimes the sources we value highly as ‘truth’ are subjective because they are mediated. They are the product of fallible human beings.

Here’s an example from my experience. In Scotland, there was no system of compulsory registration of births, deaths and marriages until 1855; before this, people often just guessed how old they were. Many times in primary sources, I came across comments like ‘I am about 14’, ‘I think I’m 35’. So a census record giving a person’s age might not be true.

And there are also the matters of intention and accident. A scene in The Sinkings with a census-taker trying to get information out of Little Jock’s family shows how a process of questions asked and answers given might result in a fabrication. What if the person being questioned has cause to give a false answer? What if the interviewer has an interest in falsifying the record? Or is lazy or incompetent? Or simply mishears or misinterprets the answers? A hundred and fifty years later, we read the census data and accept it as truth, but, in the words of a learned philosopher, it ain’t necessarily so.

At Little Jock’s trial in 1857 for stealing a red woollen shirt, many people were supposedly telling ‘the truth’. Little Jock himself was one of them: And this I declare to be truth, he said, after telling the court, among other lies, that his name was Peter Lennie. Then came a raft of witnesses contradicting his account, all saying, And this is truth. Court officials then testified to his previous convictions in different names, each official declaring, And this is truth.

I imagined another kind of truth: Mary, the woman Little Jock calls Mother, watching all of this, knowing that these superficial lies are only the tip of the iceberg:

What I’ve brought to the page in The Sinkings is historical but not history, informed ‘let’s pretend’, not truth. I gratefully acknowledge the debt of the fiction to its sources without making any claims on them. But as Willa says in The Sinkings: there are all kinds of memorials. It mattered to me, and I would like readers to know, that in the view recorded by the camera obscura, there once really was the small, indeterminate figure of a maybe-man called Little Jock.

Filed under The Sinkings, Writing

Tagged as history and fiction, research, The Sinkings, truth and fiction