The next wave (part 2): WA women writers to look out for

Welcome to part 2 of this four-part series featuring emerging Western Australian women writers with manuscripts ready—or almost ready—to submit to agents and publishers. In this post my guests are Amanda Gardiner and Emily Paull.

If a wide range of life experiences gives a writer great source material, Amanda already has a store that should last her forever. ‘I have been an au pair, a FIFO at a gold mine, a shelf stacker, and a lecturer, tutor and researcher at university.  I have worn tiny shorts and a too-small t-shirt and served food and drinks to rich people on a luxury yacht. I have been an apprentice painter and decorator and an actor. I have edited a journal and a book. I house-sat for three and a half years and moved over 30 times. I have sold antique jewellery, presented my research at conferences, organised symposia, and worked in admin, as an interviewer and oral historian, a production assistant in a film company, a caterer, a mystery shopper and a waitress. I am not sure that my varied employment history will help future job applications…’

She also has a collector’s eye for the unique and a writer’s alertness to the uncanny: ‘I recently visited the new markets that are filling the old Myer space in Fremantle and saw a beautiful pair of crystal and silver perfume bottles. As I knew that I must not, under any circumstances, purchase them, I carried them over to the saleswoman to ask if she could tell me their story. She did not know much, other than they were turn of the last century and wasn’t the engraving wonderful? I resolutely returned the bottles to their shelf, but as I walked away I thought, it wouldn’t hurt to have a closer look at the engraving. I held them up near the window and as the metal glinted in the light I realised the bottles were elaborately monogrammed with the letters “AG”. So now I own two very practical cut crystal perfume bottles that had my initials etched into them over a hundred years ago.’

Amanda’s short fiction has been published in an anthology by the 2013 Peter Cowan Advanced Writers’ cohort, and she has published various academic articles. Here is how Amanda describes her manuscript—working title Unearthing Mary Summerland: ‘On the 4th of September 1832, the body of a newborn baby boy was found washed up on the shore at the port town of Fremantle, Western Australia. As the result of an inquest into the child’s suspicious death, a 20-year-old unmarried domestic servant named Mary Summerland was accused of murdering him. Unearthing Mary Summerland is a work of literary fiction that blends history and imagination to explore what may have happened to Mary and her son.’

And here is a brief extract from the novel:

Despite the cold, the smell is very strong. It unfurls from the remains on the table to push rotten meat into Susannah Summerland’s face. Susannah begins to take thin breaths through her mouth, sealing off the end of each inhalation with the pink press of tongue to palate before exhaling through her nose. The other people in the room, the three men and Mary, do not speak, and Susannah continues breathing in this way, listening to the ocean moving back and forth across the rocks at the cliff-base of Bather’s Bay, until the Rev. looks up from his chair and asks again,

‘Do you recognise the child?’

Susannah is standing. Rev. Wittenoom and Mary’s master Mr. Leake are seated across from her, on the other side of the table. To her left the doctor Harrison guards the inner doorway. To her right her daughter sits waiting on a low stool. The dead baby lies in the centre of all of them. 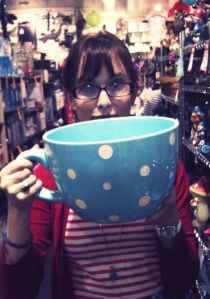 If you asked a room full of writers what their dream job would be—if they weren’t writing, of course—there’s sure to be a few who would say ‘working in a bookshop’. Emily has one of those enviable day jobs. ‘I’m very lucky to work as an independent bookseller, for two reasons,’ she says. ‘The first is that I have an outlet for doing my bit to advance the profile of Western Australian writing, which is a passion of mine. The second is that every day when I come to work, I am confronted by visual reminders of why I am doing what I am doing. Every day I see, read and talk about great books, and I am reminded of where I want to go in life, and why it’s worth all the hard work.’

When she’s not collecting books, Emily is collecting ‘coffee and tea mugs, and the assorted paraphernalia that goes with them.’ But writing occupies much of the rest of her time. Emily was regularly published in the Murdoch University magazine METIOR 2009–11, and in 2010 had her own fiction column, ‘Life with the dull parts taken out’.

Her stories have been published on Murdoch University’s website as part of the creative arts showcase, and she has been published in Trove. In 2011 she won the Katharine Susannah Prichard Short Fiction Award (under 20s category), and she is about to begin a Young Writer in Residence program at the KSP Writers Centre—something she describes as ‘probably the coolest opportunity writing has given me’.

Emily’s manuscript—working title Between the Sleepers—is a historical romance intended for adult/young adult readers: ‘The story begins in 1937 when Winston Keller, a member of the working class with a secret talent for sketching, meets the daughter of Perth’s newest business tycoon at a family dinner. The dinner is supposed to be a chance for Robert Willis and George Keller to reconnect after many years estranged, although Robert only seems interested in rubbing his wealth in his old friend’s face. But there is an unexpected consequence—Winston and Sarah Willis fall in love. Their relationship forces Winston into a world of jazz music, adultery and, ultimately, war.’

Here is a taste of Between the Sleepers:

Winston raced up the hill towards his home, towards the rows of semi-detached red tenements with fruit trees drooping in the yards. His part of Fremantle always smelled like cut grass and eucalyptus, as well as the marshy smell of the docks. Some of the houses had dark green picket fences, peeling from the heat and the salt and the wind. Others simply faced on to the road. Lawns were littered with clues to the lives of their owners: a set of lawn chairs with old crocheted lap-blankets folded on top, a tricycle parked by the front steps, uncollected West Australian newspapers piled by the welcome mat. Winston pedalled hard to crest the top of the hill.

By the time he’d coasted down the other side of the incline, he was out of breath. His tyres scraped in the sand as he backpedalled and swung on to Fothergill Street. It had just begun to get dark, and the street was still full of people. Three small children were chasing a yellow dog up and down the laneways and Winston swerved to avoid them…

You can also read
Part 1: Rashida Murphy and Kristen Levitzke

31 responses to “The next wave (part 2): WA women writers to look out for”