Tag Archives: The Art of Persuasion

Susan Midalia talks about The Art of Persuasion

Susan Midalia writes exquisite prose, and is looked up to by many as one of Australia’s leading exponents of the short story genre. She is equally well known as a teacher, editor and mentor, and I am only one of many writers who have benefited from her knowledge and generosity. She is also a friend, and a delightful human being, and I’m thrilled to feature her new book today.

The Art of Persuasion is Susan’s first novel, a work with many of the characteristics of a Susan Midalia story—compassion, wit, warmth of spirit, attentiveness to language, characters with a distinctive voice. And there are some surprises, too—a modern love story with the feel of a comedy of manners from another time, a story arc involving a political campaign in an urban Australian setting.

Here’s a little more about Susan…

Susan Midalia is the author of three short story collections, all of them shortlisted for major literary awards: A History of the Beanbag, An Unknown Sky and Feet to the Stars. She has been the judge of literary awards such as the Western Australian Premier’s Book Awards, the T.A.G. Hungerford Award and the Margaret River Press Short Story Competition. She has also been an assessor for the Literature Board of the Australia Council. She is currently a board member of writingWA and Margaret River Press, and takes great pleasure in working as a teacher for A Maze of Story, a volunteer organisation that encourages creative writing by socially disadvantaged children. Susan has lived in Perth for most of her adult life, and is blessed with a husband who works to pay the bills so she can enjoy the luxury of writing. She has two adult sons, of whom she is inordinately proud.

And here is the blurb for The Art of Persuasion…

Twenty-five-year-old Hazel is reading the classics, starting with ‘A’. It’s one way to pass the time when you’ve quit your job and lost your way. But then she has a chance encounter with an irresistible older man. When Hazel is partnered with him on a political campaign, her attraction is deepened by the strength of his convictions. Adam seems to be attracted to her too—but why is he resisting? And what does Jane Austen have to teach a young woman about life, love and literature in the 21st century?

The wonderful Michelle de Kretser has described the novel as ‘a witty and tender comedy of manners that also has political bite’. And Ryan O’Neill, winner of last year’s Prime Minister’s Award for Fiction, says it’s ‘a perfect modern romance’.

I was impelled to write my novel after seeing the memorial to the SIEV X, on the shores of Canberra’s Lake Burley Griffin. SIEV stands for Suspected Illegal Entry Vessel, a term which describes, in dehumanising militaristic terms, a boat carrying more than 400 asylum seekers that was heading for Australia in 2001. When the boat capsized, 353 people drowned; four subsequent inquiries undertaken by both major political parties absolved the federal government of any responsibility for what was described, in chilling Orwellian Newspeak, as ‘A Certain Maritime Incident’. I won’t go into details here, except to say that the credibility of those inquiries has been widely disputed. The memorial to the largely forgotten SIEV X, completed in 2007 in the face of strenuous opposition from the conservative government, was the work of the Uniting Church, the writer Stephen Biddulph and hundreds of children from across Australia. It comprises 353 white poles stretching out on an incline like a wave, and many of the poles are inscribed with the name of the identified dead. Others are anonymous. On each pole there are also paintings by children of the many joyful experiences, including rainbows, flowers, kites and birds, which have been lost to the asylum seekers. It takes a long time to observe each pole; to reflect and try to take in the enormity of the experience. Seeing the memorial four years ago reduced me to tears, and has stayed with me ever since. 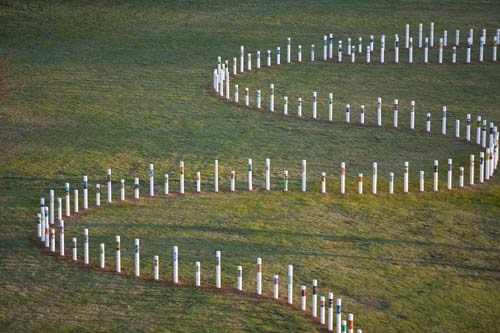 A second and very different impulse for writing was my love of Jane Austen’s novels, and the pleasure of teaching them. In particular, I wanted to explore what Austen’s moral concept of love—falling in love with a person whose values and conduct one admires—might mean to a young woman living in a highly sexualised contemporary culture in which what matters is surface appeal. I also wanted to model my mode of social and moral criticism on Austen’s, using wit to mock vice and folly, to entertain instead of lecturing the reader. The genre of comedy also enacts an optimistic vision of the world; and while there’s every reason these days to despair of corruption, self-interest and bigotry, it’s crucial to retain a belief in progress and the fundamental decency of people. It was a challenge to write an optimistic novel without lapsing into sentimentality or smugness; to affirm the value of kindness without being self-righteous or naïve.

2 places connected to my book

The physical setting is Perth, in 2014, and it’s primarily a political space. Based on my own experience in political door-knocking campaigns in the western suburbs, I’ve used ‘place’ to reveal the complacency, indifference, cynicism and just plain ignorance of many people I encountered. And that was in the more educated suburbs of Perth! My city also has a ‘laidback’ atmosphere and ethos; as one of the characters in my novel remarks, our low crime rate, lovely beaches and clean air make it a great place to bring up children. The ‘downside’ of this middle-class idyll is a hedonistic insularity and blindness to the suffering of others. (I’ll always remember the former Prime Minister John Howard describing his vision for Australia as ‘relaxed and comfortable’, as if Australia was a giant Ugg Boot instead of a nation committed to social justice and equality.) The Perth setting of my novel is also an attempt to contest the Sydney- and Melbourne-centric view that prevails in Australian literary culture. It’s difficult for many West Australian writers to gain traction over east: to be invited to writers’ festivals, have your work reviewed, get reasonable sales figures. Setting my novel in Perth was thus a way of insisting that West Australian writers have something of value to contribute to the national literary culture.

The other important space in my novel is psychological: what happens in the space of the mind. I’m a writer of character and consciousness who enjoys imagining what it might be like to be someone who is very different from me. I’m a woman in my sixties pretending to be 25-year-old Hazel West: a millennial who’s unemployed, aimless, mildly depressed and looking for love. (We do, however, share a sense of humour and a deeply irritating tendency to self-pity.) The Art of Persuasion is a third-person limited narration, so it was a challenge, as well as fun, to ventriloquise Hazel’s voice and evoke her state of mind and cultural milieu. I sent the unpublished manuscript to my younger son, who was twenty-seven at the time, for feedback, and he told me I had the voice and the cultural references of his generation just right. Using Hazel’s perspective was also a way of contesting the stereotype of young people as narcissistic, lazy and irresponsible. I know from my experience as a parent and teacher that there are many admirable young people who are committed to social justice and the viability of the planet, and who wish to make a useful contribution to society.

2 favourite things from my novel

Hazel is my favourite character because of her complexity: she’s both feisty and self-doubting, acerbic and tender, a young feminist pining for love, and with the capacity to learn from experience. But I’m also fond of the novel’s romantic hero, Adam. His literary antecedents come from Jane Austen: he has the moral solidity of Captain Wentworth (Persuasion), the hidden past of Mr Darcy (Pride and Prejudice), and, like Mr Knightley from Emma, he’s considerably older than the heroine, acting as her guide or mentor. I’m interested in what makes for a ‘good’ man in the early twenty-first century; ‘good’ both in his personal life and in the wider community. Adam is also sexually attractive, but in an understated way, and I’ve used this to make fun of the hypersexualised romantic heroes in pulp fiction. I wanted to remind readers, as Austen’s novels do, that subtlety is far more erotic than blatant displays of masculine sexual prowess. Unlike Austen’s heroes, however, Adam is a widower with a five-year-old son, and it’s partly this complication that acts as an obstacle to the consummation of his relationship with Hazel. Romantic comedies rely on an obstacle to the union and the erotics of deferral: I wanted the reader to keep asking how long it would take until Adam and Hazel finally ended up together in bed!

In a favourite passage from my novel, Hazel’s lifelong friend and flat-mate Beth is ranting about women who succumb to the very ideas that reduce them to decorative objects. She and Hazel—who’s trying hard to keep up with her garrulous friend—are also slightly drunk (that was part of the fun of writing it).

Beth started waving her glass about because she’d just seen something truly disturbing, she said, an ad in the local paper, set out in huge pink font: WHAT’S THE DESIGNER VAGINA? She’d nearly toppled over when she read it, she said, all the stuff about tightening this and rejuvenating that, collagen and creams, making women feel even more ashamed of their bodies than they already did … almost spilling her wine now, denouncing all the women, thousands there were, having surgery on their bums because they wanted a perky one like Pippa Middleton’s. That kind of thing drove her nuts, she said, and who the hell was Pippa Middleton anyway? Hazel tried to explain but Beth said she already knew and that’s not why she was angry. She was angry because Pippa Middleton was only famous for having a sister who was only famous because she’d married a prince who seemed like a nice enough guy, cheering up disabled kids and all that, but that wasn’t the point, was it, about the monarchy? An accident of birth, unearned wealth and privilege and the next girl who told her they adored Kate Middleton because she was so pretty and wore such stylish clothes and had such a cute baby was in serious danger of being punched. Hazel was confused for a moment because she thought Beth wanted to punch the baby, and then she wondered aloud what they could have for dinner.