Is the face familiar? You may have seen Michael in theatre productions (What the Butler Saw, Macbeth, Ghost Train, A Midsummer Night’s Dream), or a short film (he was nominated for Best Actor at the 2013 WA Screen Awards for One Night Only), or on television (Three Acts of Murder, Roll, The Shark Net). And he will soon be on screen in the feature film These Final Hours, which has just premiered at Cannes.

Behind the scenes, he has a long list of theatre directing credits, including two nominations for Best Director in the Equity Awards (The Deep Blue Sea and Missing), and has recently directed several short films (Tartan, a short film he also produced, was recently screened on ABC2).

Michael is also a writer and an educator in theatre and film, and is in the final stages of a PhD in Performing Arts at the Western Australian Academy of Performing Arts (WAAPA).

In other words, he’s a busy man, and I’m delighted that he has found time to talk about some of the things he loves.

3 things you love about what you do

1. Working in the arts has glamorous moments, but it’s still a tough old business, not for the faint-hearted. What keeps me hanging in there isn’t the tantalising idea of fame and fortune but the colleagues I am surrounded by every day. Film and theatre involve a high level of collaboration in what is oftentimes a Sisyphean journey, and this ensures that life is much less solitary. Maybe I’m just a sucker for a good stories and witty anecdotes.

Being surrounded by individuals with broad talent and eclectic lived experiences has to be one of the major upsides to this bizarre and tumultuous artistic existence. So many of the people involved have depth; perhaps it’s their ability to share and imperative to communicate thoughts and ideas that create the space for this to happen. I love being around these people whenever I can.

2. Anyone who understands teaching will know that teachers are often born, not made, and I’ve been, according to my now thousands of students in Australia and America, fortunate enough to be one of the former. Of course, they could be lying. They are storytellers, after all.

My teaching came about because of the need to earn a living in some other fashion than barwork—an artistic cliché and my stock in trade, along with labouring, during the lean years of my early career. But over the years it has developed into a craft, and then into something more important. It has forced me to articulate what I believe I know about my craft and has demanded of me the continual elaboration and dedication and discipline needed to be relevant as a tutor. It is a natural part of the artistic experience, to pass on what you know. It’s provided me so much pleasure. It’s kept me warm on cold nights. It’s an incredible honour.

3. I love storytelling. I suspect it’s inherent in me—I’m a Scotsman of Southern Irish descent. My greatest creative pleasure is the imaginative exploration that occurs early in the process. The problem solving. The new life that is being produced. Imaginative exploration—yes, that’s the key for me. That’s not to say that my own life is boring. I jumped out of a plane last year, so I’m not lacking stimulation—some might say hyperstimulation. But the chance to watch the formation of a story taking place gives me utter delight. It’s particularly the case with work where I follow the process through from conception to presentation. We’re very lucky in Australia that we have such a long tradition of storytelling, reinventing and innovating over tens of thousands of years. Storytelling, then, could be said to be evolutionary—I think that’s as important as landing on a far-flung planet. 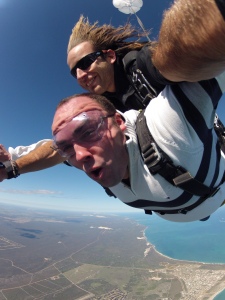 Skydiving reminds me of going on stage—the build-up, the door opening, the exit from the plane and then just being in the moment because you can’t go back, you can only go forward.

1. I love New York. I suppose that’s where the T-shirt comes from. New York captures the best and worst of the modern world—it’s an artist’s conundrum and paradise. It offers dreams and nightmares, but it is what it is and refuses to be defined. The energy is palpable. It actually takes a while to walk around Manhattan, not because it’s a big city—it’s really not—but because there is so much to take in. And every borough offers so much diversity.

I took this picture from a New York cab on the way to Brooklyn to see Steve Buscemi reading the poetry of William S. Burroughs, which one of my students got for me. It’s an image of New York City you don’t often see.

However, I also love to drive around upstate New York. Twenty minutes out of the city you hit the most wondrous mountain country along the two-lane blacktop. Immense rivers, wild deer, dense forest embrace you, and you would never believe that NYC was sitting on the edge of it all. New York State offers a feast for the senses.

2. I grew up in a rough working-class suburb of Glasgow during the darker years of Tory social engineering, which indelibly marked me. Perhaps this is the main reason I’m attracted to stories and projects that deal with social inclusiveness and injustice. With Thatcher’s devolutionary cry of ‘There’s no such thing as society’, my father, a fitter in the Glasgow shipyards, would take me with his workmates on the Yarrow Social Club minibus out to the beautiful lochs and deserted pale white beaches of Western Scotland to fish. These men embodied society for me. A close-knit and stoic bunch who wanted their sons and daughters to have an opportunity to take in the natural beauty of Alba each weekend and wanted to show us something special. Memories of fires on stony beaches, of wild deer startled in the undergrowth, of wading in cold dark water, of waves breaking over boats in the Irish Sea—all of these I hold dear to my heart. It was truly a special time, as childhood should be. It would be nice to go back there one day…

3. There’s a lot of the isolated world that I still want to see. Forests down south, savannahs, wastelands, frozen tundra… What concerns me is how much is being destroyed by what we are doing. I just hope that if I ever have kids, there will be some semblance of the world I love to show them. We’re at a crossroads and it can go one of two ways… Let’s hope we come together as a people to work it out. I think there’s a place for art in this task.

1. Working on What the Butler Saw at Belvoir Street Theatre as an actor. It was directed by Jim Sharman and starred Max Gillies, a very dear friend. It was probably the pinnacle of my acting career to date, and to be in a dressing room with a living legend like Max was something special. He represents to me the greatness of Australian storytelling. They don’t make them like Max anymore.

2. Working as a teaching artist in Leonora over a year and a half back in 2002–03. I was employed along with several others by Barking Gecko Theatre Company to work closely in an artistic capacity with the youth of the town. It was a pivotal experience where I realised that a successful career was about more than just me; it was also about the people I reached out to along the way. We made a difference through storytelling in all our different ways, and we were gifted with many stories, too. I got more from that opportunity than any other. Part of it was timing; part of it was realising what I wanted to do with my life. The audience, in whatever way they manifest, is always the priority for me.

3. Stories that matter are really important to me. Of course, this will always be subjective, but when I finish a book, or writing something, or watching a film, I feel that whatever it is that I’ve been engaged with should have changed me. Hopefully, that’s what happens when someone engages with my own artistic endeavours.

Sometimes I wonder what I’m doing working in the arts. Then I see pictures of myself like this and I chuckle—it’s so not me. When all’s said and done, my life is just a collage of images and words. And long may it continue.

For more about Michael McCall, see Actors Now and IMDB.