Happy New Year, everyone, and may 2014 bring you new joys, new and exciting challenges, new ways of looking up and looking down.

My first 3, 3 3 guest for 2014 is Ian Parmenter, OAM, who defies any neat label describing what he does, has done and might well do!

He is possibly best known as the presenter/producer of the award-winning ABCTV series Consuming Passions, which was aired in Australia and 15 other countries between 1992 and 2002. He is also a noted food, wine and travel writer and broadcaster; founding Festival Director of food/wine/beer festival Tasting Australia; and the author of 12 recipe collections (most recently All Consuming Passions) and an award-winning collection of memoirs, Sheer Bottled Bliss.

Last year I had the pleasure of visiting Ian in Margaret River, the food and wine capital of Western Australia, where he now lives. He has certainly made his mark on the community since the seachange move from Perth—for example, as a founder member of the Margaret River Food Group, which established the first farmers’ markets in WA’s South West. (If you’re visiting the region, the Margaret River markets on Saturday morning are a must!) As WA ambassador for the Stephanie Alexander Kitchen Garden Foundation, he was also instrumental in establishing the Margaret River Primary School’s kitchen garden program.

So over now to Ian, and some of the things he loves.

3 things I love about what I do

1. I love spreading the word about real food. This has happened as a result of presenting Consuming Passions on ABCTV for 10 years, which allowed me to explore food and food culture overseas, as well as in Australia, and enabled me to meet the best chefs and producers. More recently I’ve been working with Hollywood Private Hospital in an attempt to change hospital food. It’s worked. Our Reinventing the Meal project has led to the hospital being voted best in Australia for its food and food delivery by an independent organisation, Press Ganey.

2. The success of Consuming Passions also has allowed me to spend more time on cookery, something that I’ve been doing now for almost six—yes, six—decades. I started in my mother’s kitchen, then learned more from our Belgian housekeeper when we lived in Brussels, and although I’ve never trained as a chef, I’ve spent plenty of time cooking and eating. It’s long been my passion. In fact, I’ve worked out that I’m coming up to the day when I will have consumed 75,000 meals (not including the odd Cherry Ripe from the hotel mini-bar). Frankly, I think I enjoy preparing food as much as eating it.

3. I started out as a journalist before going into TV production. In recent years I have gone back to writing for newspapers and magazines, as well as doing photography. Also in recent times I’ve wound back my event management activities and public appearances, enabling me to spend more time travelling with my partner, Ann, than with a bunch of workmates, lovely though they are… And I get real pleasure from putting together stories with pictures.

1. France. It is said that one should never return to a place where one had ‘the best time’. To this I say: pish and tosh. It doesn’t matter how many times I visit France, I simply adore the country. Paris is my favourite city, and while I think there are plenty of places within and outside the country that do better food, I find the culture irresistible. Mind you, I think it helps that I speak French fluently. Although England was the place of my birth, and where I spent most of my formative years, I’ve always felt more at home in France, perhaps because I have Huguenot (and possibly Basque) in my blood. 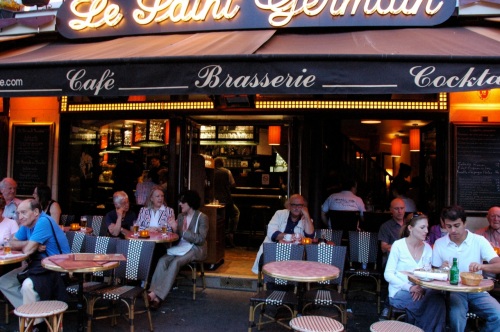 2. Crete. I spent four weeks there this year. What a fabulous island, with a great history. We did a two-week archaeology and gastronomy tour with two fabulous guides: Heinrich Hall, a German academic with an Irish accent (don’t ask), and a Cretan Adonis called Vangelis (seriously). Despite the heat, HH always wore the same clothes: corduroy velvet trousers, sports jacket with leather elbows, lace-up shoes. Twinning archaeology with gastronomy was a very good call, since I have a low tolerance threshold for sarcophaguses. We spent two weeks in the tiny village of Douliana, inland and away from the tourist traps, and at a perfect time of year, Greek Easter, which lasts a week. We felt part of the village and were invited to no fewer than three Greek Easter family lunches. Forget Greek weddings; this is the real deal. The invitation we accepted was from a family of winemakers, who made really fabulous wine, which they were selling for $7 a bottle. We made so many really good friends that we’re going back there.

3. Spain. In particular northern Spain—Basque country on one side, where you find San Sebastian on the Atlantic coast, and Catalonia on the other, home of Barcelona (or, if you prefer, Bar-thay-lona in Spanish but not, apparently, in Catalan), and, between them, the wine-growing region of Rioja (pronounced Ree-ocka). Not only are the food and wine superb but so is the architecture, old and new. Add to that the region’s music, which is to be discovered everywhere in the cities. Walking the back streets of Barcelona, I heard what I thought was the sound of a CD being played in someone’s apartment. Rounding a corner, I discovered it to be a busker sitting on the steps of an old church, playing a Mozart horn concerto backed by a recorded orchestral backing track—a kind of upscale karaoke. Simply brilliant. And of course a walking tour of San Sebastian tapas bars—called Pinxtos bars—is absolutely the best way to enjoy an evening.

(Foods that contribute to dishes rather than stand-alone favourite foods, which include crab, soft French cheeses, and homemade vanilla ice-cream.) 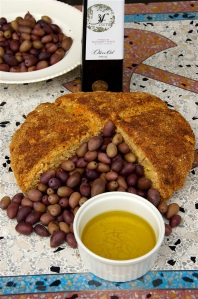 1. Olive oil. There is only one kind of olive oil and that’s cold-pressed. Forget terminology such as pure, light, lite (aaaargh!); only what we commonly call extra-virgin is the real deal. I use around a litre a week and it’s produced by my next-door neighbour, Sharon Dunford of 34 Degrees South. It’s beautiful. About the only dish I don’t use it in is mayonnaise, because I find it too strongly flavoured.

2. Chicken. I find this the most versatile of meats. I never use breast and wonder why restaurants do so. Thigh is much better, easier to prepare correctly without drying out, and I think has a better texture. I also buy chicken necks and frames for stock. A regular kitchen occupation on Saturday is making really good stock, which I don’t believe can be made with just vegetables and herbs (sorry vegetarians!).

3. Chocolate. There is a saying that strength is defined as the ability to break a bar of chocolate into several pieces…and then eat only one piece. I’m not just a chocophile; I love including it in my homemade ice-creams, and a 70% dark chocolate is just perfect in the Belgian dessert Dame Blanche (white lady): vanilla ice-cream topped with hot chocolate sauce (including Grand Marnier or other orange liqueur) and toasted nuts. OMG, so good.