This month in our Writers Ask Writers series, the question posed is: If you could jump into the life of another author, past or present, for one day, who would it be and why? And it’s a pleasure to welcome, as guest blogger for August, Kirsten Krauth, who has recently released her accomplished debut novel, just_a_girl, described as ‘a Puberty Blues for the digital age’. There are links at the end to Kirsten’s choice of author, along with those of Annabel Smith, Natasha Lester, Sara Foster, Emma Chapman and Dawn Barker. 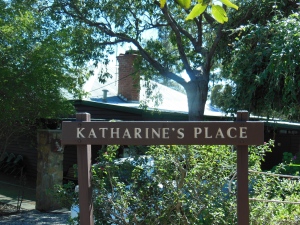 I have been a member of the Katharine Susannah Prichard Writers Centre, in the Perth hills suburb of Greenmount, for many years, and last weekend I spent a few hours there fulfilling my duties as a member of the Literary Advisory Board. Serendipitous, because it gave me an opportunity to take a photograph of the lovely old weatherboard house that was once Katharine’s home and place of work, and is now still a place where writers work—and learn and share writerly things.

Katharine Susannah Prichard was productive in her long lifetime. It makes me reel to think of what she achieved: 13 novels (translated into 13 foreign languages for international publication), 10 plays, five short story collections, two volumes of poetry, an autobiography, a work of non-fiction, and many pamphlets and articles. I doubt there are many literary writers who could come close today.

While I admire this amazing output, it is not the reason I would choose to be Katharine Susannah Prichard for a day.

Nor is it because she had an especially happy life. She did not—or so it appears, at this distance, to me. I don’t doubt that there was happiness, both through her writing and in her personal life; one only has to read the passionate dedication to Hugo Throssell in her autobiography, Child of the Hurricane, to know there was love:

To you, all those wild weeds
and wind flowers of my life,
I bring, my lord,
and lay them at your feet;
they are not frankincense
or myrrh
but you were Krishna, Christ and Dionysus
in your beauty, tenderness and strength.

But she also lived through unbearable personal sadness, losing her father and, later, her husband to suicide. And as someone who cared deeply about social justice, and believed in fighting for something better for all of humanity, happiness frequently eluded her.

As a young journalist, she worked in the slums of Melbourne, witnessing the plight of women slaving in sweatshops. In 1908–09, she spent a year in England, a time of hunger marches, Salvation Army soup kitchens and extreme poverty—symptomatic of a fraying social fabric (as Virginia Woolf was to say, ‘On or about December 1910, human character changed’). Returning to England just before the First World War, she remained there throughout the war years, and took part in suffragette marches and feminist lectures on women’s issues such as birth control. For a week in 1914 she reported from the battlefront in France.

These experiences deepened her compassion for the powerless, a thread running through so many of her novels—exploited Aboriginal women in Coonardoo (and the play Brumby Innes), returned servicemen in Intimate Strangers, struggling timber workers in Working Bullocks.

They also formed in her a great interest in pacifism and socialism and, later, in communism—and this last made her a target of official inquiry. It took guts to be a communist in those times. She became known as ‘the Red Witch of Greenmount’, and during the years of the Second World War her house was searched and she was put under surveillance amid fears that she was signalling from the hills to enemy craft at sea!

It’s not because I long to be notorious that I would wish myself into Katharine’s skin.

But I admire Katharine Susannah Prichard. I admire her commitment and her compassion—and especially her fearlessness. And that is why I would like to be her for a day. I would like to feel that kind of fearlessness in my blood. I harbour a suspicion that I might also find it an adulterated brew, tainted with the self-doubt and uncertainty that are found in any writer. But I imagine, I am sure, there is much I could learn about courage from this remarkable woman, this compassionate writer.

Here are the links to companion posts from our group and guest Kirsten Krauth:

Kirsten Krauth: When I was a kid, a family member was obsessed with [Leonard Cohen] … I always rolled my eyes; it’s so embarrassing when adults think their music is cool.—Read more here

Annabel Smith: [As Truman Capote] the day would begin with me lounging in my smoking jacket while I opened my mail, including fan mail, letters of outrage about my sexuality and moral degeneracy …—Read more here

Natasha Lester: [Joan Didion] made meaning out of her life. She wrote about unique experiences in a way that made them seem commonplace and connective.—Read more here

Sara Foster: I will go back to a day in 1990 on a crowded train and become JK Rowling the moment she met Harry Potter in her imagination for the first time …—Read more here

Dawn Barker: Mary Shelley … had lots of trauma in her life, but she had one wonderful summer that would change her life and propel her into literary history.—Read more here