Dianne Touchell is one of my favourite writers of young adult fiction. Among the many things I admire in her work are its fearlessness, its compassion, its humour, and the respect she so obviously has for her young characters. It comes as no surprise to me to hear that she thinks young adults are far more interesting than grown-ups.

I am delighted to be featuring her new novel, Forgetting Foster. Here is the book’s blurb…

Foster suddenly recognised the thing that rolled over him and made him feel sick. It was this: Dad was going away somewhere all on his own. And Foster was already missing him.

Foster Sumner is seven years old. He likes toy soldiers, tadpole hunting, going to school and the beach. Best of all he likes listening to his dad’s stories. But then Foster’s dad starts forgetting things. No one is too worried at first. Foster and Dad giggle about it. But the forgetting gets worse. And suddenly no one is laughing anymore.

A heartbreaking story about what it means to forget and to be forgotten.

Over now to Di… 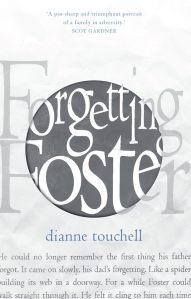 1 Two people I loved were affected by Alzheimer’s disease and psychotic dementia. Strong, opinionated, charismatic women with large personalities and a lifelong interest in their internal and external worlds. The sort of women you can never imagine would die at all, let alone slowly walk out of their own bodies long before death actually took them. It does something to you, watching them slowly leave you, watching them slowly leave themselves. It did something to me.

There’s the denial that anything is actually wrong, then the anger that you’re now caring for someone who should be looking after you, then the guilt about that anger, then the exhaustion of that caring, and then the fear that as this godawful illness seems to have its teeth in the women of this family I might go the same way. Every time I misplace my keys or walk into a room and forget why I’m there I laugh and then I panic.

2 I began to wonder what makes a relationship. If a relationship is created and sustained through shared memories, mutual histories and love, what happens when one person in that relationship begins to lose their memory, their history. What happens the first time they look at you with fear instead of love. I struggled with this. I still struggle with this even though both these women are dead now and it doesn’t make a lick of difference.

1 The grown-up mind, which hides in practicalities, logistics, rosters, medical jargon and medication regimes. The mind that takes comfort in turning emotional chaos into an Excel spreadsheet of what time this pill has to be taken and what time this doctor has to be seen. The mind that doesn’t breathe much because too much down-time will create a space for pain. An impractical landscape where I chose to pitch my tent. I spent a lot of time there.

2 favourite things about the book

1 Foster’s father loves stories and has created a love of stories in Foster that enables him to retreat to toy soldiers and dragons and myth as a way of interpreting and coping with confusion and grief. This gives Foster a lovely perspective, an understanding that the world is big and full of bravery. I particularly like this response from Foster when someone takes the time to ask him what he has learned from his dad:

He said stories are the most important thing. He said people don’t tell stories or listen to other people’s stories enough. He said people are mad as March hares but to love them anyway. He said battles are won or lost before the first shot is fired. He said babies need to get the finger of God on them. He said if God is real then so are Dragons. He said the brain is a super-hero and he said Mum is a princess. Oh, and he said an unkind word can clear a room quicker than a fart.

2 Foster has a way of making things that aren’t funny…very funny. He hasn’t learned to be self-deprecating or cynical yet, which means much of the humour comes directly from bald honesty. I like the scene where Dad takes all his clothes off because they are ‘itching’ him. Fossie simply announces that Dad has his Christmas socks on, without mentioning they are the only thing he has on. The grown-up response is shock, embarrassment, defeat. Mum is so appalled that she drops her phone mid-conversation into a bowl of cereal. Throughout the book I could always rely on Fossie taking the sting out of desperate situations by speaking his mind without fear of the consequences, the result of which is often very funny.