2, 2 and 2: Natasha Lester talks about A Kiss from Mr Fitzgerald

It’s a pleasure to welcome Natasha Lester to 2, 2 and 2. Natasha has been a writer friend for several years (see the Writers Ask Writers series of posts) and I’ve had the privilege of reading, in draft form, parts of the novel she is about to release, so I know that readers are in for a treat!

A Kiss from Mr Fitzgerald (Hachette Australia) is Natasha’s third book, and she already has her fourth ready to follow in April 2017. Her previous novels are What is Left Over After (2010, winner of the TAG Hungerford Award for an unpublished manuscript) and If I Should Lose You (2012). She is well known as a writing teacher and mentor, and has been described by The Age newspaper as ‘a remarkable Australian talent’.

Here’s the blurb for A Kiss from Mr Fitzgerald:

It’s 1922 in the Manhattan of gin, jazz and prosperity. Women wear makeup and hitched hemlines—and enjoy a new freedom to vote and work. Not so Evelyn Lockhart, forbidden from pursuing her passion: to become one of the first female doctors.

Chasing her dream will mean turning her back on the only life she knows: her competitive sister, Viola; her conservative parents; and the childhood best friend she is expected to marry, Charlie.

And if Evie does fight Columbia University’s medical school for acceptance, how will she support herself? So when there’s a casting call for the infamous late-night Ziegfeld Follies on Broadway, will Evie find the nerve to audition? And if she does, what will it mean for her fledgling relationship with Upper East Side banker Thomas Whitman, a man Evie thinks she could fall in love with, if only she lived a life less scandalous?

And now over to Natasha:

2 things that inspired your book

1 Bizarrely, a biography of Emily Dickinson, Lives Like Loaded Guns, by Lyndall Gordon, was the thing that really kicked the idea off. And no, I’m not a huge Emily Dickinson fan, nor am I a big biography reader. It was really a moment of serendipity. I was at the Perth Writers’ Festival in 2012 and Lyndall Gordon was speaking about her book and for some reason I went along to the session—I don’t know why but I’m so glad I did! Lyndall spoke so feelingly about Emily Dickinson and her biography that I just had to buy it. One of the things the biography touched on was the fact that in the mid to late nineteenth century, a very small number women began to go to university for the first time, even though it was very much frowned upon by society. Of course, these days, women go to university and nobody thinks twice about it, so I was fascinated by the idea that university used to be, for women, an exception rather than the norm. Being the evil novelist I am, I began to wonder what would be the most unacceptable thing for a woman to study at university and it was medicine, with obstetrics right at the top of that list. That was when I knew I had my book.

2 The other inspiration was a scribbled note I’d written down after watching an ABC documentary on the history of music about 10 years ago. One of the segments in the documentary was about an infamous Broadway revue called the Ziegfeld Follies and I thought to myself at the time: wow, that would be a fabulous setting for a novel. So, a woman studying obstetrics in New York combined with my scribbled note about the Ziegfeld Follies in New York became, via a long and winding road, A Kiss from Mr Fitzgerald.

2 places connected with your book

1 New York is the lifeblood of my book. It wouldn’t be the same without that city. It’s a city I love, a city with a huge history, but it’s also a city of opposites: uptown and downtown, the east side and the west side, skyscrapers and tenements. And it’s those contrasts that I play with in my book: two sisters who are unalike, yet related by blood; two brothers who are the obverse of the other, yet love the same woman; the struggle of a woman to break into the world of medicine and obstetrics against the wishes of all the men in charge; the life that goes on in a boardinghouse in Greenwich Village versus that which takes place in a mansion on the Upper East Side. All the places I’ve used in A Kiss from Mr Fitzgerald actually existed, from the New Amsterdam Theatre at 42nd Street, to the Sloane Hospital for Women on Amsterdam Avenue, to Chumley’s speakeasy in Greenwich Village, and Minetta Street, where Evie lives, on one of the few curving streets in the city.
[The following photos were taken by Natasha on a research trip to New York.] 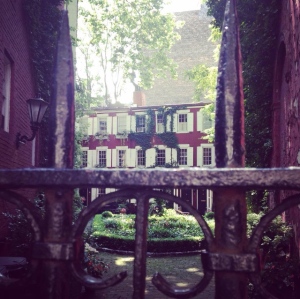 2 Evie grows up in Concord, Massachusets, which is where Louisa May Alcott lived, and where she wrote Little Women. I wanted Evie to grow up outside Manhattan so that the decision to go to medical school involves not only a complete shift in the direction of her life, but also a physical shift in terms of where she lives. And Little Women was a source of inspiration to me when I was writing—it’s a book about sisters, as is mine—so I thought it was fitting to set part of A Kiss from Mr Fitzgerald in Concord. It’s completely unlike New York City, full of pastel-coloured timber houses and so much greenery, so it lends another contrast, plus it’s close to Radcliffe College, where Evie initially goes to school. I visited both Concord and New York when researching the book, which meant I was able to write with a full and complete picture of both places in my head.

2 favourites from the book

1 The 1920s has a very specific set of slang words, which I just loved using. Terms like panther sweat for whiskey, spifflicated for drunk, hotsy-totsy for excellent, and billboard for a flashy woman. Plus the animal anatomical phrases, used to signify that something is great: cat’s whiskers, cat’s meow, cat’s pyjamas, butterfly’s boots, bee’s knees, elephant’s eyebrows. I had lots of fun with all of these.

2 One of my favourite quotes from the book is the first line of Part 2, where we jump ahead two years in time. Our last impression of Evie at the end of Part 1 is as a determined woman who’s decided to go ahead with medical school no matter what the cost to her reputation, but she’s still a relatively polite person, and a little afraid of what her decision will mean. Then she has this line of dialogue at the start of Part 2 and we know instantly that things have changed: she’s much braver now, and she’s prepared to fight. Her supervisor at the hospital, a man who can’t comprehend the idea of a female obstetrician, has just told Evie, in front of all the other medical students, that she’s not qualified to have an opinion about birthing women, and this is Evie’s response:

‘Given that I possess one, I think I have a more intimate knowledge of the vagina than any man could ever lay claim to. That should make me well qualified to be an obstetrician,’ Evie said.

A Kiss from Mr Fitzgerald will be in stores on 26 April.
Visit Natasha’s website
Find out more at Hachette Australia

Tagged as 2 2 and 2, A Kiss from Mr Fitzgerald, Natasha Lester