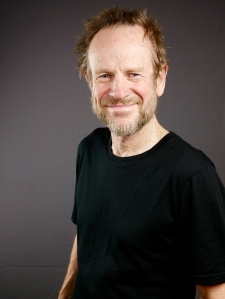 It’s impossible to be in a room with Jon Doust and not end up laughing at something—often yourself! I also credit him with teaching me a few things about the proper way to breathe while speaking to an audience, after he noticed that I wasn’t really breathing at all! Which is a roundabout way of saying he’s a generous man as well as a funny one.

Jon is a Western Australian author based in Albany, and it’s a pleasure to feature him here, with his new book, Return Ticket.

Jon’s first novel, Boy on a Wire, was longlisted for the 2010 Miles Franklin Award, and his second, To the Highlands, was released to critical acclaim. Return Ticket completes the Jack Muir trilogy. He is also the co-author of three children’s books and has had short stories published in several anthologies.

If Jon’s face looks familiar to you, it might be because his varied professional life has included comedy and acting, as well as farming, retail, banking, journalism and professional speaking. He has appeared as a scientist in ABC-TV series Itch, a priest in horror film Needle, a hard-core AC/DC fan in Thunderstruck, a badly beaten and dead dero in courtroom drama Justice, a mad environmental polluter in TV series Bush Patrol, and a one-armed gambler in the documentary The Edge of the World.

An active member of his local community and beyond, Jon has been a driving force behind various original projects and has undertaken roles in organisations such as the Wilderness Society of WA, Greenpeace and Creative Albany.

Here is the blurb for Return Ticket…

Sometimes the best place to see yourself is from another place.

It’s 1972. When hot-headed, impetuous Jack Muir gets off the ship in Durban, he fails to get back on. Instead, he sails into misadventure, fleeing the stifling town of Genoralup to try to lose himself in South Africa at the height of apartheid. But the past has a way of catching up with you, and soon Jack is running again, this time to a kibbutz in Israel.

In the course of a lifetime, Jack will travel far, always caught between fleeing from and seeking those things he needs: a mother’s precious gift, a lover in a time of war, a kind and steady woman.

And, across time and across continents, old Jack Muir will remember those who helped him become a decent man, a better father and a friend.

Over now to Jon…

The two things that inspired Return Ticket were the two books before it. Let me explain.

Return Ticket is the last in the Jack Muir trilogy, One Boy’s Journey to Man. I always had it in mind to write two—one based on my five years in boarding school (Boy on a Wire) and one set on a kibbutz, Israel’s unique socialist experiment (Return Ticket). The book in the middle, To the Highlands, I had no intention of writing, but it blew in my face and stayed there. Each of them was inspired by a lack.

Nothing like Boy on a Wire had been written, exposing the bullying, the religious hypocrisy, the suffering of those unable to stand up for themselves and the mothers who went along with a system they could barely cope with.

Nearly all books I had read about Papua New Guinea, apart from a book of short stories by Trevor Shearston, Something in the Blood, had been twee and sweet and with patronising threads denying the truth of Australia’s colonial occupation. And so I wrote To the Highlands.

The last of the three was inspired by the first two, completing Jack Muir’s journey to man. I had to bring him as close as I could to a whole man—all his issues revealed, some sorted; his relationships mature and healthy; and his final place, both internal and external, arrived at, all circles closed. Many of mine probably never will be, but I wanted Jack to get there, to achieve something akin to what Carl Jung might call individuation. And helping Jack get there has helped me get closer.

There are so many places—the home town, Bridgetown, where I learned to shoot guns, climb trees, love koolbardi/magpies, drive tractors and grow fruit and vegetables; Manjimup, where I learned how to belong and thrive in a community; Kincannup, Kinjarling, Albany, where my soul lay in wait. And then there’s the other places that filled me.

Two, in particular, both much loved and loathed at the same time.

Israel, Palestine, where I learned to love, to understand, to believe, and where I found my lifelong partner.

Then there is Iran, Persia, where I learned, again, how love, compassion, understanding, generosity, high culture and tolerance can exist alongside their opposites.

I acknowledge the men and women who nurtured me.

First, my grandfather—storyteller, journalist, bushman, Noongar speaker, hunter, fisher, a green before it was a colour. Roy Doust once edited the Blackwood Times, then the Warren Times, both papers named after once-great rivers that flow through the South West. He was also an orchardist and he married a lady with a shop, so we grew up on a farm and in a shop. 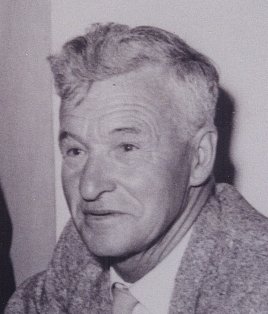 Nothing more enjoyable in the years before radio and television than sitting in a circle around Pop and listening to him regale us with tales of days gone by. Before he died he came to me with a pile of paper in his hands and said: ‘Here are all my stories, I want you to have them.’ Then he turned, picked up his typewriter and passed it on, and I would have wept in front of him but I saved the tears for later, when I could weep the deep weep of a boy who felt honoured.

Pop had a son, my father, who had four sons. One he wrestled with most of his life but eventually learned to understand and love for who he was.

Return Ticket is dedicated to three women—my mother, the mother of my first Israeli love and a Holocaust survivor, and my wife. Without them I would not have amounted to much, and even with them, I sometimes wonder if I did. 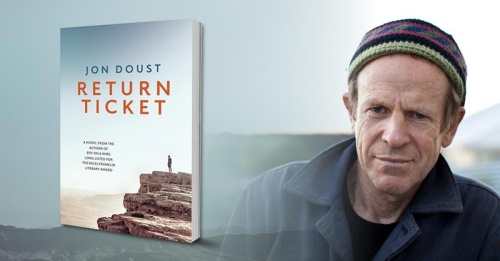