Sunflowers on the ripples…

Today was my annual visit to the beach. The one day of the year when, in the early morning, I walk along the shore of the Indian Ocean instead of the footpaths of my own suburb.

I’m carrying a bucket of flowers—roses from my own garden and a clutch of brilliant sunflowers—and up ahead I can see the group of people I’m joining. They are some of the descendants of C.Y. O’Connor, the brilliant engineer who contributed so much to the infant colony/state of Western Australia. And today is the anniversary of O’Connor’s death 118 years ago, when he rode his horse Midnight into the sea—from here, the beach that now bears his name—and took his own life.

I tip my roses into a larger box of offerings.

Not being a swimmer myself, I take photographs, pick up shells, watch the others swim out to the bronze horse-and-rider statue (the work of sculptor Tony Jones) with bunches of bougainvillea in their hands. I’ve given a few sunflowers to one of the swimmers to add to the others now garlanding the bronze.

O’Connor was the father of artist Kathleen O’Connor, and the sunflowers, which she loved and painted again and again throughout her career, honour the strong connection between them.

Wading out a little, I strew bucketfuls of petals, and set two large sunflowers on the wavelets to float away.

Before long there is a ragged trail of blossoms between statue and shore, and another heading north-west into the open sea. It occurs to me that every year, those sunflowers take the lead.

By the time I leave, there is little sign of that floral procession floating to the north-west, but if you squint you can just make out two specks of cadmium on aquamarine. I wonder where the waves will carry them, Kate. 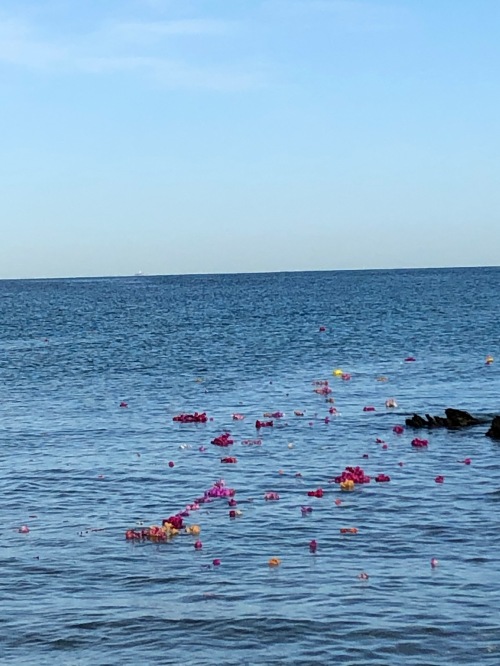 6 responses to “Sunflowers on the ripples…”