I’m so excited to be introducing this novel, this writer, for the first 2, 2 and 2 post of 2020. I have loved Donna Mazza’s work for years—her early short stories, her Hungerford Award–winning novel The Albanian, and, more recently, award-winning short fiction that has evolved into new and edgier areas. Needless to say, I’ve been looking forward to her second novel, Fauna, for a long time.

Donna Mazza is an award-winning author of poetry, short fiction and novels. Her debut novel, The Albanian (2007), won the TAG Hungerford Award and she was the Mick Dark Flagship Fellow for Environmental Writing at Varuna, the National Writers House, for her short fiction. Donna teaches literature and writing at Edith Cowan University and lives in a small country town in the South West with her family, including many chickens.

To that I would add that she is a much loved and respected member of the Western Australian writing community, particularly in the South West. I learned a great deal from her when I had the amazing good fortune to be part of an early writing group with Donna and three other brilliant women writers, and I can only imagine how many students, emerging writers and peers have benefited from her sure and generous guidance.

And so to Fauna. Here is the blurb…

How far would you go to save your daughter?

Set seventeen years into a very recognisable future, Fauna is an astonishing psychological drama with an incredible twist: What if the child you are carrying is not entirely human?

Using DNA technology, scientists have started to reverse the extinction of creatures like the mammoth and the Tasmanian Tiger. The benefits of this radical approach could be far-reaching. But how far will they go?

Longing for another child, Stacey is recruited by LifeBLOOD®, a company that offers massive incentives for her to join an experimental genetics program. As part of the agreement, Stacey and her husband’s embryo will be blended with edited cells. Just how edited, Stacey doesn’t really know. Nor does she have any idea how much her longed-for new daughter will change her life and that of her family. Or how hard she will have to fight to protect her.

Fauna is a transformative, lyrical and moving novel about love and motherhood, home and family—and what it means to be human. 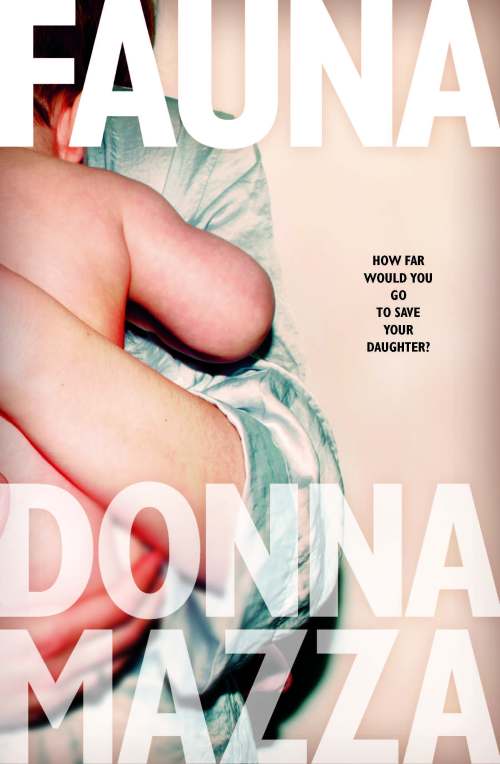 The first time I saw Ljuba, the baby mammoth, was in the May 2009 edition of National Geographic. She was the best preserved Ice Age baby found in Siberia and I had the privilege of seeing her in the Australian Museum in Sydney in 2018. Ljuba planted a seed for me, but Fauna is not about the mammoth. In April 2013 National Geographic ran another article, ‘Bringing them back to life’, which considers the ethics of using genetic technology to revive extinct species. Thylacines, passenger pigeons, bucardo and mammoths were all up for consideration, but I took this in a different direction and applied it to humans. Fauna isn’t just about the ‘what if’ question but digs deeply into what this would really be like for a human mother.

There is a narrative in the novel connected to a story my grandfather told. When he was a young man in Southern Italy, he said they were digging the foundation for a house and unearthed a grave. In there, they found a bronze bowl and some human bones. In his story, the bones are very long and they wondered if they were from a real giant. I love the mystery of this, it’s so evocative. In my story I have taken inspiration from it and dreamed up something different for the Italian relics. In Fauna, the bones which Stacey inherits from her stepfather are inspired by this story my grandfather told but they connect to her own story.

I have always really loved the landscape where I grew up around the Leschenault Estuary and for me it is a place where I feel my own roots are planted. The family in Fauna move to the South West and live on a fictional property near the water there. I spent lots of time walking and observing in this landscape, to give the work a really authentic feel of that place and to try and celebrate that beautiful landscape and its wildlife. I watched the birds and walked in the water and on the beach, taking notes. I tried to imagine what the place would look like in the near future, looking at clues in the trees and at the edges of the water.

Several years ago my family went down to Hamelin Bay for a short holiday and stayed in a chalet at the caravan park there. We were woken by the awful, meaty sound of two drunken men punching each other. It was a windy night and the long branches of the peppermint trees were blowing around. A frayed length of old rope swung about too, giving the whole place a very haunting feel. During the day, this place is quite lovely and doesn’t feel at all gothic, but that night made quite an impression. Naturally, it’s the perfect stop for a rare family holiday in Fauna; they even make a pit-stop at Simmo’s Ice Creamery and visit the emus there, as I have with my own family.

Stacey is the narrator of Fauna and as I worked on the novel, and her back story developed, she was in need of a mother. I had a lot of fun creating her mother, Sandra, and I feel like we might be friends if she were real. She is a colourful and alternative woman who is very honest and has lived a bit of a crazy life. I don’t really know where she came from but I feel like I know her and sometimes she made me laugh out loud as I was writing her.