2, 2 and 2: Rashida Murphy talks about The Historian’s Daughter

It’s my great pleasure to be introducing Rashida Murphy’s accomplished debut novel twice this week—first, here on looking up/looking down; second, on the occasion of her book launch on the 31st (details here)

I absolutely love The Historian’s Daughter—the intelligence and vulnerability of young Hannah; the tender relationships between the sisters, between them and their mother, and between Hannah and her ‘mad aunt’; the novel’s pace alongside its sophisticated use of restraint; and the lyrical prose that sings from the page as the narrative takes us from India to Australia to Iran and back to ‘home’.

Here is the book’s blurb…

In an old house with ‘too many windows and women’, high in the Indian hills, young Hannah lives with her older sister Gloria; her two older brothers; her mother—the Magician; a colourful assortment of aunts, blow-ins and misfits; and her father—the Historian. It is a world of secrets, jealousies and lies, ruled by the Historian but smoothed over by the Magician, whose kindnesses and wisdom bring homely comfort and all-enveloping love to a ramshackle building that seems destined for chaos.

And then one day the Magician is gone, Gloria is gone, and the Historian has spirited Hannah and her brothers away to a new and at first bewildering life in Perth. As Hannah grows and makes her own way through Australian life, an education and friendships, she begins to penetrate to the heart of one of the old house’s greatest secrets—and to the meaning of her own existence.

And now, over to Rashida…

1 A sentence I wrote in my journal in 2007: This is not the story he wanted me to tell. I thought it would be the start of a short story. I had no idea who ‘he’ was and what the ‘story’ would be. In 2008–09 my husband and I moved to Melbourne and I wrote a few short stories that didn’t go anywhere. I started writing The Historian’s Daughter in 2011 and this sentence began to make sense. Now it’s the first line of my novel.

2 An incomplete memory. I grew up in a fairy chaotic household (in India) with itinerants wandering through, often with little explanation. I remember a group of Iranian students who lived with us at various times and one boy in particular who stayed with my family for several years. I don’t know what happened to him. This bothered me, especially when I made friends with Iranian refugees in Perth, so I imagined (and researched) what life would have been like for a young person caught up in a revolution. The novel is, in part, my attempt at bringing closure to events I cannot inhabit anymore.

1 Iran—in particular, its capital city, Tehran. I’ve never been there but I based some of the action of the novel in the city. It was strange to be ‘writing a place’ I’d never been to and I wondered several times whether I should choose another place. Especially because all ‘good writing’ should come from ‘what you know.’ But the Iranian Revolution of 1979 placed my characters firmly within that history, so it was hard to avoid. I steeped myself in Iranian films and novels and history and drove most of my Iranian friends to distraction by asking them endless questions about food and culture (and eavesdropping on their conversations). I don’t speak Farsi but I can follow some of it.

2 Perth. Funny, for a novel partly set in India and partly in Iran, it’s actually Perth that has the strongest resonance for me. Perth’s sunny disposition provided the perfect background for a novel about darkness and family misdemeanours—in a way that (I hope) West Australians can relate to. And despite the fact that my writing always seems to locate itself in ‘other’ places, Perth is home. I can’t imagine being anywhere else. Except, maybe, Florence.

2 favourite characters in the book

1 Jarrah the dog. I am not a dog person—most definitely a cat person—so I have no idea why or how Jarrah padded in so firmly, and settled into my writing life so comfortably. Jarrah’s appearance caused us both (me and the main character Hannah) much consternation and surprise. I think Jarrah and his owner, Gabriel, arrived at the same time and I just went with it. But Gabriel has a function as the laconic Australian romantic interest, whereas Jarrah gads about, reclining under kitchen tables, rebuking Hannah, making friends with her sister and generally behaving better than most people in the novel.

2 Gabriel. I chose the name in honour of one of my literary heroes, Farmer Gabriel Oak from Far From The Madding Crowd. ‘My’ Gabriel is a woodworker (which is probably why he has a dog called Jarrah) and volunteer firefighter, a good Aussie salt-of-the-earth type, whose straightforward thinking confuses Hannah, who can’t fathom why he’s so cheerful and confident. Hannah doesn’t have much to be cheerful about. Here’s the first time Gabriel appears in the novel.

Bent over a large plastic bag filled with sawdust and wood shavings, hands and arms plunged into its depths, he muttered small curses and agitated the dust that settled on him like brown snowflakes.

I watched from the door as he straightened up holding a small round object and said, ‘Gotcha little bugger.’ Then, his right hand over his eyes to peer at me, he sneezed loudly again and said, ‘Oh heck. How long have you been there? Come in please. I’d lost a router bit in there somewhere.’

He stamped his feet, whacked his chest with his hands and came towards me, trailing curls of wood and smelling of smoke, a tall man with green eyes and laughter in his voice.

‘What can I do you for?’ He offered me a warm, dusty hand and gripped mine firmly in exchange.

Easy to see why Hannah falls in love with him, right? 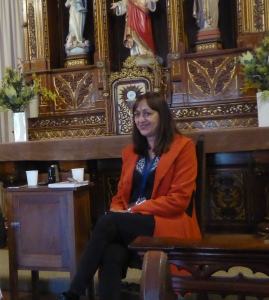 Tagged as 2 2 and 2, Rashida Murphy, The Historian’s Daughter, UWA Publishing

28 responses to “2, 2 and 2: Rashida Murphy talks about The Historian’s Daughter”