2, 2 and 2: Jenny Ackland talks about The Secret Son

I have been following Jenny Ackland’s blog, Seraglio, for some time, and was delighted to have the opportunity to meet her in Ubud recently, where she was launching her debut novel, The Secret Son.

Jenny has travelled widely and spent several years living in Turkey and Japan. She now lives in Melbourne, where she is a writer and teacher.

I am intrigued at what Jenny has said about The Secret Son, and it’s on top of my Christmas reading pile. Here is the book’s blurb:

Two men, living almost a century apart, with an unknown connection. Set in Australian and Turkey, The Secret Son tells the story of what happens when an Australian soldier, James, is accidentally left behind at Gallipoli. Helped by a young Turkish boy, James settles on a mountainside village, never to return home. Almost a century later, young Turkish-Australian Cem travels to Turkey, against the wishes of his haunted, tight-lipped grandfather. What is the story behind the dark deeds that connect the two men? An Australian historian determined to find the truth, a stolen inheritance, a wishing tree, a long-lost grandmother, and an unlikely sweetheart come together in a dazzlingly original, audacious and exhilarating novel about love, honour and belonging. The Secret Son is a moving meditation on the strength of women and what it means to be a good man.

1 The seed of origin of The Secret Son came when I was living in Istanbul in 2000. I had been married to a Turkish man for ten years (why yes, a carpet seller!) and we had a child, who was then three. My mother came to stay with us and for my birthday gave me a trilogy of novels by Turkish author Yaşar Kemal called The Wind from the Plain. It was the first novel in that series that introduced me to the rambunctious and vivid lives of a group of Anatolian villagers, seasonal cotton pickers whose small lives exploded onto the pages. I was stunned by the beautiful prose, the tender rendering of these people and the humour with which Kemal described their lives of battle and conflict.

The Wind from the Plain was the first Turkish literature I’d read, and was seminal for me. I’d loved Istanbul from the moment I’d arrived in 1990, as a young backpacker, only there because her father had paid for her ticket so that she could go, as some sort of proxy for him, to the 75th commemoration at Gallipoli that April. In the ancient part of a metropolis, where others complained about the too-frequent and oppressive mosque calls to prayer, I was excited and felt entirely satisfied being there.

I read the trilogy and I decided I wanted to write my own story, a novel, about a bunch of Turkish villagers living in a Turkish village. I soon had 60,000 words, but then life got in the way as it does and the work was put to the side until 2010. I realised that much of the Turkish village stuff would have to go, but it still forms an important component of the novel that eventually emerged.

2 Four days after leaving Melbourne, I met my future husband on the grass at the Hippodrome outside the Blue Mosque, and that same night went to Gallipoli for the dawn service at Anzac Cove. Standing there on the beach, seeing the old soldiers walking to their seats, each escorted by a young Australian or New Zealand serviceman, watching old men who’d survived the horror as almost-boys raise their walking sticks and wave to the crowd, had been unexpectedly moving to this callous young woman. I cried with everyone else. I took photos and knew I would never forget those moments, but I never expected I’d write about it in a novel or that it would be relevant to any novel I might write. But it turns out that it was an intrinsic part of the way this novel emerged, in parts, over years.

First, I had those 60,000 words set in my imaginary Turkish village. Next came the idea of Cem, a young Turkish-Australian man, child of migrants, growing up in Melbourne. He was the bridge for Australian readers, and a character who could visit Gallipoli in 1990. The second bridge to the village was James, a young man from Beechworth, who gets accidentally left behind in Gallipoli during the Allied evacuation of December 1916. How could I write a novel about Turkey, particularly one that drew connections between that country and this, and not include Gallipoli in some way? I had to find out a way to try to write about this iconic part of Australian history without being clichéd, predictable and trite. While it’s not a large part of the book, it is a crucial element.

2 places connected to the book

1 The area around Beechworth, and extending down to the Strathbogie Ranges, is known as Ned Kelly country. In my novel, Beechworth is the country Victorian town where James grows up with his beekeeping mother, Madela. The reason for the inclusion of Beechworth is that one part of my story is concerned with the possible secret son of Ned Kelly, and that James might be that son. The Strathbogie Ranges are a stunning part of Victoria. There is something mystical about the landscape: small hills and rises, with no great sweeping flatlands between them, enormous granite boulders scattered about. You get the sense of being pocketed away, nestled even, when you are within that landscape. I am drawn as a person and writer to rural areas. Where others seek coastlines and ocean, I turn the other way, and my mind often travels inland, in the opposite direction from the locations Germaine Greer once noted we have built our cities, along the beaches, looking outwards, away from the great inhospitable interior. I like land and hills and rivers. I like wide open spaces, not dense forested mountains. The ocean scares me but I plan to write about it one day.

2 My second place connected to the novel is a metaphysical one. It was a state I held mentally while writing the book, as well as several states I wanted to explore thematically in the novel. I’m really interested in the interstitial space that exists between cultures and identity, between one boundary and the next. I am also interested in the idea of traversing time, nations, histories, identity, gender and even genre. Not strictly a historical work, this novel includes real historical characters that have been expanded fictionally and given new lives (maybe cheekily). Two of Australia’s enduring cultural fascinations (Ned Kelly and Gallipoli) have been mashed together, there’s an element of mysticism or magical realism, and time skipping to let the reader see either the conclusions or the likely outcomes of most of the main characters. The other state I held while writing this book was I attempted to be playful and not take it too seriously, allowing myself to follow paths that might have seemed ludicrous and risky. But I reasoned that if I didn’t have fun while writing, and encounter surprises and feel exhilarated and set myself challenges while writing, then the reading experience would probably be a flat one. I suppose it was a way of justifying to myself how I could dare write this story, and how I could dare enjoy doing it so much.

2 favourite things connected to the book

1 Berna is many people’s favourite person in the book. Berna was originally a side character, but she emerged more strongly towards the end of the development of the manuscript as a necessary strong anchoring female voice and as a character who sits at the centre of the two men’s storylines. Her narrative is written in first person and hers is the only voice the reader gets in that form.

Berna is a mystical and knowing old woman. She is also wry. While the male concerns in the book are about working out one’s path in life, how one wants to be in life, how to be a good man (and these are universal concerns, of course), Berna is the central spindle around whom the threads of the other narratives wind. Her voice first came into the manuscript in the form of her feminist rant, which I named ‘Berna’s Lament’, and I realised this was the psychological centre of the book and that Berna needed to be more prominent.

2 When I was wrangling with the structure of the book, I was imagining it as a Turkish carpet with a medallion design. This was really helpful and an amusing challenge to myself to ‘make it fit’. As I mentioned above, I wanted Berna’s Lament to be at the exact centre of the novel (the central ‘medallion’), with the narratives of James (first medallion) and Cem (third medallion) sitting on either side. I had scenes written on index cards, and laid them out on the floor over and over, adjusting and shaping, until I had it in perfect balance. Then it went to the publishers for the editing process and things had to be moved a little, but still, in my imagination, it’s in the form of carpet; the medallions are there, repeating motifs are there, and the borders are there as well as the fringe. The ‘intentional mistake’ is mentioned in the book as something that carpet weavers from the Islamic world deliberately do, because in their minds only God can create something perfect. Other people say this isn’t true, that the mistake a person can see in an oriental carpet is simply a sincere mistake, or a forced change of colour because the wool supply has run out. But I like to believe in the intentional mistake, and while I did have an intentional mistake that was edited out before the manuscript even got to the publisher, of course there are still errors in the book and I comfort myself by thinking they are intentional, in the spirit of the carpet weavers of Anatolia. 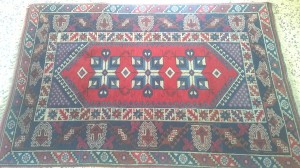