The new issue of Review of Australian Fiction has just been published, no. 5 in the special volume showcasing WA writers, edited by Laurie Steed. I’ve just read my subscription copy—with a great deal of pleasure, too, as Natasha and Yvette are members of a much-valued writing group I belong to.

Natasha Lester, with two published novels (What Is Left Over, After, winner of the T.A.G. Hungerford Award; and If I Should Lose You) is the established writer of this pairing. Natasha’s third novel, A Kiss from Mr Fitzgerald, is due out in April 2016. Paired with Natasha is Yvette Walker, whose stunning debut novel Letters to the End of Love won the 2014 WA Premier’s Book Award in the WA Emerging Writer category and was shortlisted for a 2014 NSW Premier’s Award (Glenda Adam’s Award for New Writing). 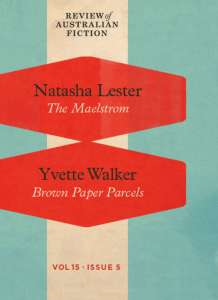 Natasha’s story, ‘The Maelstrom’, re-creates New York City in the wake of Hurricane Sandy—scenes that resonate with me, as I happened to be there too a few days after Sandy hit. The story begins with a line borrowed from a Joan Didion essay:

She went to New York to stop herself from asking her husband for a divorce. But now she is sitting in a hotel in the East Village in the dark. She cannot turn on the lights because there is no power. She cannot flush the toilet because there is no water. She cannot telephone anyone to tell them she is fine because the phones don’t work. She cannot send an email because every network in the city is down. She is trapped in a speculative kind of fiction with an uncertain ending. Needless to say, this is not what she had in mind when she decided to go.

In Yvette’s story, ‘Brown Paper Parcels’, the protagonist, Kathryn, becomes enmeshed in the world of Forster’s Howards End as she rides the train to Fremantle:

Kathryn stood on the train platform reading Howards End. Margaret Schlegel had intercepted Mrs Wilcox at King’s Cross Station, having decided after all to accept Mrs Wilcox’s invitation to Howards End. Kathryn would have loved to hear the rattle of Pullman carriages, the curse of a surly porter; to watch cigarette smoke curl around the fingers of a young man, ash and lint about his coat. Perhaps all the decades of reading Forster had finally seeped into her blood. The train for Fremantle arrived. Kathryn closed Howards End and stepped into the first carriage.

RAF publishes two stories every two weeks, delivered in mobi (for Kindle) or ePub (for iPhone/iPad, Kobo, Nook, Readmill) format. Individual issues of RAF are $2.99. A subscription for six issues is $12.99.

Filed under Review of Australian Fiction