2, 2 and 2: Rebecca Lim talks about Afterlight

Anyone who read the last issue of my newsletter will know that I loved Rebecca Lim’s YA novel The Astrologer’s Daughter (Text Publishing, 2014) and its fearless protagonist Avicenna Crowe. So I was delighted to find that Rebecca has recently released a new novel, Afterlight—and even more so when she agreed to answer some 2, 2 and 2 questions. 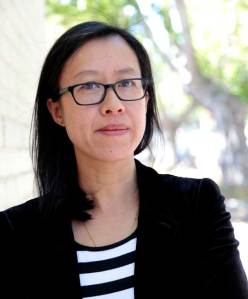 Rebecca has been prolific since leaving her former profession as a commercial lawyer to write full time. She is the author of sixteen books for children and young adult readers, including the acclaimed Mercy series. Her work has been longlisted for the David Gemmell Legend Award, the Gold Inky Award and the CBCA Book of the Year Award for Older Readers, and she has been an Aurealis Awards and Davitt Awards finalist. Her novels have been translated into German, French, Turkish, Portuguese and Polish.

Rebecca was born in Singapore and is now based in Melbourne.

Here is the blurb for Afterlight:

Since her parents died in a freak motorbike accident, Sophie Teague’s life has fallen apart.

But she’s just enrolled at a new high school, hoping for a fresh start.

That’s until Eve, a beautiful ghost in black, starts making terrifying nightly appearances, wanting Sophie to be her hands, eyes and go-to girl.

There are loose ends that Eve needs Sophie to tie up. But dealing with the dead might just involve the greatest sacrifice of all.

Dark, thrilling and unrelentingly eerie, Afterlight will take you deep into the heart of a dangerous love story, revealing the otherworldly—and deadly—pull of past wrongs that only the living can put right.

Over now to Rebecca…

I write these slightly freaky books for children and young adults that feature empowered female characters living in a fictional world that—as much as possible—resembles the real world I live in and not the one depicted in, say, Neighbours. So if you pick up one of my stories—no matter if you’re a three-year-old or an eighteen-year-old—you’ll be met with young women from different socio-economic and ethnic backgrounds finding reserves of strength, ferocity, tenacity and adaptability in the face of great adversity. I’m not interested in presenting the lives of pretty people facing mildly perplexing personal conundrums, because I don’t know anyone like that. So as a starting point, the ‘real’ world will always inspire any fiction I create and you’ll find my characters will reflect you, me and the woman standing next to you at the bus stop. My fictional universe includes Chinese and Colombian kids, people who speak Italian, Spanish or Russian, homeless teens living in their cars and people who have to work as strippers, waitresses or clairvoyants, just to survive. Archangels, demons and Norman knights also exist in my universe because, damn it, they can. I always proceed on the basis that anything is possible.

We live in a dark and deeply complex world. The news is a potent trigger for a lot of my work. A few of my novels are fictional responses to some terrible abduction, cold case and imprisonment stories that were emerging around the time I was writing the books. The things people do to each other in real life are staggering, and I write to try and make sense of questions like: Why do bad things happen to good people? What happens to human energy, human consciousness, after death? Are we ruled by fate or by our own free will? How does one bad past act reverberate into the future?

Afterlight had its genesis in a terrible shooting that occurred early one weekday in the Melbourne CBD a few years ago. A bikie and a tabletop dancer were involved. Innocent people on their way to work, or just going about their business, were critically injured or killed. My outrage about violence against women is an underlying theme in most of my books for young adults.

I live in Melbourne and have lived all over it geographically since we moved here from country Queensland when I was a pre-schooler. I’ve set my books in places like Paris and Milan, Macchu Picchu and small town USA, but nothing gives me more of a thrill than having my characters literally running for their lives through places I’ve known and loved for years.

My last book, The Astrologer’s Daughter, was set in and around Chinatown and North Melbourne. The action in Afterlight takes in the famous Greek Quarter in the CBD, but I also have Sophie ‘Storkie’ Teague (my main character) living in a rundown pub in North Fitzroy and running errands out to far flung Melbourne bayside and northern suburbs, at the behest of an insistent dead woman. The walking trail that runs alongside Merri Creek is pivotal to the last stages of the book.

At heart, I’m a massive introvert, and sometimes going out into the world, or seeing what we as a species do to each other and our environment, can be a little disheartening or depleting.

Early music—particularly choral music by Palestrina, Allegri, Taverner and Monteverdi, and any recording, really, by Jordi Savall or Hespèrion XX—will have a quietening/recharging effect. I managed to sneak a choir or two and a few choral and classical music references into my series for young adults that began with Mercy (2010, featuring a fallen amnesiac archangel), which I was secretly chuffed about. Nobody else enjoyed those bits as much as me, possibly (!), but then again no one has probably ever quoted lyrics from Lakmé by Léo Delibes in a YA novel, so there you go.

The other thing I can’t do without is reading. I read all over the shop—YA, picture books, historical fiction, literary fiction, thrillers, mysteries, true crime, science, you name it—and I like to write across the spectrum, too. Why just write a contemporary YA novel when it can also be a mystery/thriller/paranormal book with touches of romance in it?

Afterlight is in bookshops now
Find out more at Text Publishing

Tagged as 2 2 and 2, Afterlight, Rebecca Lim