2, 2 and 2: Richard Rossiter talks about Thicker Than Water

Richard Rossiter was once my lecturer, became my academic supervisor, and continues to be my mentor and friend—and for all these things I often wonder whatever it was I did to be so fortunate. Whenever I’m asked to name the most significant influences on my writing career, I always think of Richard, and in Edith Cowan University’s Celebration of the Book exhibition catalogue five other writers (Robyn Mundy, Danielle Wood, Annabel Smith, Julia Lawrinson and Terry Whitebeach) similarly acknowledge the importance of his contribution.

Following on from his career as an academic and supervisor, Richard has worked as an editor, writer, board member of a small publisher, and frequent judge of writing competitions. He says that in these latter roles, he is enormously impressed by the standard of writing that is submitted and realises it is a privilege to be published in a very competitive market.

Richard lives, for most of the time, in North Fremantle, Western Australia, at the narrowest point between ocean and river. Otherwise he is ‘down south’ in a cottage surrounded by trees within hearing distance of the ocean, north of Gracetown.

His short fiction has been published widely, and a collection, Arrhythmia: Stories of Desire (UWA Publishing), was published in 2009. His new book, Thicker Than Water (UWA Publishing), is a novella, and I’m delighted to be featuring it in the 2, 2 and 2 series.

Here is the book blurb:

When Marie D’Anger saw that look in Edy Baudin’s eye, she knew it was time to go home.

Marie D’Anger returns to the family home in south-west Australia after years of living in England, to a father whose destructive impulses have been curbed by a stroke, and a mother whose passivity she never understood.

Behind her is Edy Baudin and the deep love they shared before he left, suddenly and without explanation. Further back still is her father and his fraught relationships with his mother, brother and step-father. But when Edy follows Marie to Australia, her father’s shocking revelation brings hidden things to the surface.

This is quintessential Rossiter: an intense, poetic, family drama and psychological tragedy.

Over now to Richard…

At a micro level, one prompt for the book was a photograph sent by a friend from England. It was a selfie in black and white: two faces close up with remarkably similar eyes and nose and mouth and I began to wonder (yet again) about attraction between couples.

More removed and abstract is an ongoing interest in how identities are formed: what shapes our lives in terms of immediate circumstances, but also the larger forces at work—social, cultural, political, historical—and the fact that these (often tangential) forces are represented by the stories that we tell, and those that we hear, those told to us in myth and fiction and contemporary media.

Integral to the story is the southwest coast of Western Australia, specifically between Gracetown and Margaret River. It is important not just in a physical sense, but also in terms of the stories that embody and surround it. So it’s the trees, the granite, the limestone, the coastal heath, the ever changing ocean and the people who have carved out a life there—especially at Ellensbrook and the mouth of the Margaret River. 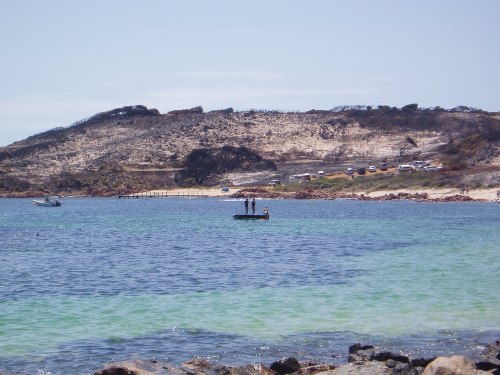 There is a place that exists in my mind (and of course does exist in various known and unknown places) that is encapsulated in a sentence that has stuck with me for a number of years, in a letter from Fanny Bussell to her cousin Capel Carter. She is describing the house at the property ‘Cattle Chosen’ (built 1832) and its surrounds. She writes: ‘The windows command on one side a pleasant view of the river, with the country in its unredeemed state…This side of the prospect is full of beauty, and yet I dwell with more interest and delight on the opposite scene…It is more essentially English and bears the marks of our daily improvements.’ She talks of the ‘improving hand of the European’ and clearly sees the need for nature to be redeemed from its natural state, from wilderness.

There is a brief reference to such a garden on page 52 of Thicker Than Water. For me, it works as an image of all sorts of divisions within our society; it reflects our uncertainty about identity and our history.

2 favourite passages in the book

There are two rather different passages in the book that I have some special affection for, probably because they are, very loosely, based on my own experience. The first describes the character Kenneth as a young boy on his way home from boarding school for a long weekend. He is on a train and has been furtively glancing at a girl nearby and adjusting his clothing, loosening his tie and removing his cap, so he looks more casual—like her. She gets off at the station before his, but he is still thinking about her when he hops off, hoping his mother will be there to meet him.

As the train slowed down, he stood up, looking out of the window at the lights and the few people standing around. There she was. He opened the door and stepped out before the train had stopped. He’d seen older men do this; they took a neat step forward and walked swiftly away from the carriage. It seemed grown up and sophisticated. He stepped out and lost his balance because the train was going too fast and his bag made him clumsy. He staggered and fell forward, grazing his arms. Then his mother was at his side, helping him up like a child. His eyes smarted with the sting. Sweetheart, are you alright? Why did you do that? He couldn’t answer her. He picked up his bag and walked towards the exit, his mother following and still asking him questions. He was glad Andrew was not with her. Then he thought of the girl, and kicked at the gravel on the path. (41)

The second passage concerns a description of the house that Marie, a key character in the novel (daughter of Kenneth), moves into. She is unused to the sound and feel of it, especially during storms at night. Hetty, who has died, was her grandmother.

On most mornings she was organised with a little pile of wood in a box beside the stove, so she didn’t have to venture outside to the woodheap. But not this one. Last night she was home late; it was dark and wet and cold, so now she didn’t have any kindling and it was still raining. She knew it had started up about 3am because she’d been woken by the sound of the rain, at first an insistent pattering on the tin roof. And then the wind came in massive gusts that shook the whole house. Somewhere there was a gap in the cladding, or the lining, and she could feel a thin draft of cold wind on her face as she lay in bed, in her grandmother’s bed. Hetty must have felt this draught, she thought, and she too must have lain awake on nights like this. Every so often there would be a roar that you could hear starting down the valley and she would lie there, her whole body tense and listening and waiting for it to strike the house. Everything rattled and shook. She could hear objects flying off the veranda, and imagined the roof lifted a little before settling back down. On edge for the next gust, she wondered whether the whole structure, the corrugated iron and timber beams, would rise up like a giant prehistoric bird and fly off into the darkness. (78–79)

Thicker Than Water is in bookshops now, and you can find out more at:
UWA Publishing

Tagged as 2 2 and 2, Richard Rossiter, Thicker Than Water

7 responses to “2, 2 and 2: Richard Rossiter talks about Thicker Than Water”